I want to keep this recipe a secret. I really do.

But I can’t. It would be reprehensible of me to refuse to share this gem of a cookie with my readers. Besides, you deserve something really good after such a long wait. Please accept my apology in the form of this chocolaty, tangy morsel.

It’s not just my recipe either. My good friend, Tanisha, joined me in the kitchen last night, and this is what came of it. Great things happen when friends end up in the kitchen. This cookie is proof.

More often than not, my inspiration for creating a dessert recipe is found in a decadent sweet that has enough simple carbohydrates to keep your blood sugar levels elevated for weeks. On top of that, it’s usually void of any nutritional value.

I think I can speak for Tanisha, too, when I say, our goal is to make desserts that rival the original in taste while adding a lot of powerful nutrients.

In this case it was the Double Dark Chocolate Pomegranate Cookies, one of our winter time favorites, that got a complete health makeover.

No white flour (actually, no grains at all), no gluten, no refined sweetener. Just the good stuff, plain and simple. Cranberries are high in antioxidants (as are pomegranates, so feel free to substitute.) and so is dark chocolate, so consider this your immunity boost for cold season. (See disclaimer below.) 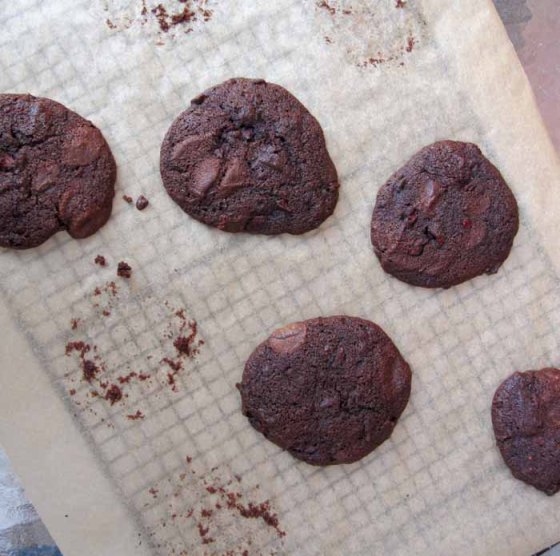 Recipe created by Sarah and Tanisha

1. Heat oven to 350 degrees. Cover a cookie sheet with parchment.

2. Combine almond flour, cocoa powder, soda, arrowroot powder. Cut in butter. (I used my fingers because I’m lazy and didn’t want to get out any equipment.)

6. Place dough in heaping tablespoons on the parchment covered sheet, leaving room to spread a little.

8. Slide parchment on to a cooling rack and repeat steps 5-9.

I am not a doctor or registered dietitian. I do not claim to cure any cause, condition, or disease, though my suggestions may prove helpful. I do not provide medical aid or nutrition for the purpose of health or disease. Howbeit, every food one chooses to consume either greatly benefits one’s health, or diminishes thereof.

This is merely a food blog in the most colossal way possible. The information held on this blog is solely the opinion of a layman of the kitchen. The research and information covered in this blog is open to public domain for discussion and in no way breaches or breaks the boundaries of any law that I currently know of. I am not a doctor nor do I claim to have any formal medical background, however my background with food from decades in the kitchen is extensive. I am not liable, either expressly or in an implied manner, nor claim any responsibility for any emotional or physical problems that may occur directly or indirectly from reading this blog or the baking and eat of the recipes hereon.

Sometimes, just sometimes, things don’t materialize like I plan them. It happens in every area of life, you know?

Like getting braces practically the first time I walk into a dentist office.

Or watching the garden burn up from withering hot temperatures of 113 with no sun-ripened, picked-right-off-the-vine, heirloom tomatoes in sight.

Or making imitation Reese’s cups that don’t turn out. That one really gets me.

Somehow we get carried along as “life goes on” and one unplanned thing after another rises off the pages of our carefully written script morphing into something we never imagined. As annoying as these little (or sometimes huge!) edits can be, I know that they will make the story better – more readable. In the end, when the last page is turned and the cover softly closes, we will see why it all happened like it did, and how the tweaks and turns are what made the story one that just couldn’t be put down until it was over.

In other words, I trust the Editor. It doesn’t always make sense – in fact, it rarely makes sense, but I know the One Who really authors my life knows what He is doing. I’ll leave the pen with Him…

…and keep making messes in the kitchen.

So, I don’t know about you, but I love Reese’s Peanut Butter Cups. Well, I used to. That was before my taste buds started changing and milk chocolate started tasting like chocolate milk, or milk with sugar, or something like that.  A couple weeks ago a friend of mine turned me on to making my own chocolate nut butter treats using healthful ingredients. Rich dark chocolate, coconut oil, peanut butter and honey – that’s about it!

The first batch I made turned out great using a mixture of honey and maple syrup to sweeten. Unfortunately I wasn’t prepared to blog about it, so I made another batch about a week later. This time I used maple butter and honey for sweetener and butter instead of coconut oil. If you like gooey, caramel-y treats follow this route, but this wasn’t the result I wanted.

Nix that (well, eat that!) and try again! My Dad had mentioned trying an almond filling, so that was my next test. 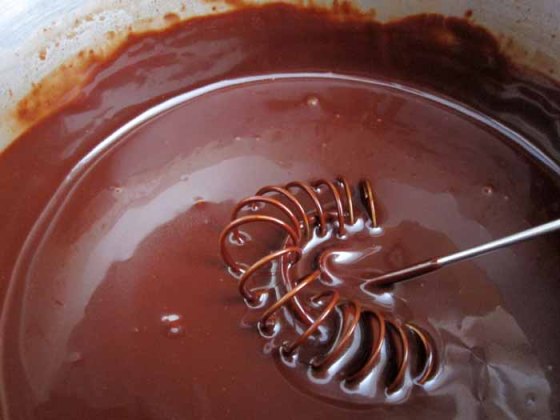 “Well,” said Pooh, “what I like best…” and then he had to stop and think. Because although Eating Honey was a very good thing to do, there was a moment just before you began to eat it which was better than when you were, but he didn’t know what it was called.

I decided to use just honey to sweeten and I knew immediately something wasn’t right with the chocolate. If it hardened it’d be okay though…

Drizzle with remaining chocolate and freeze. 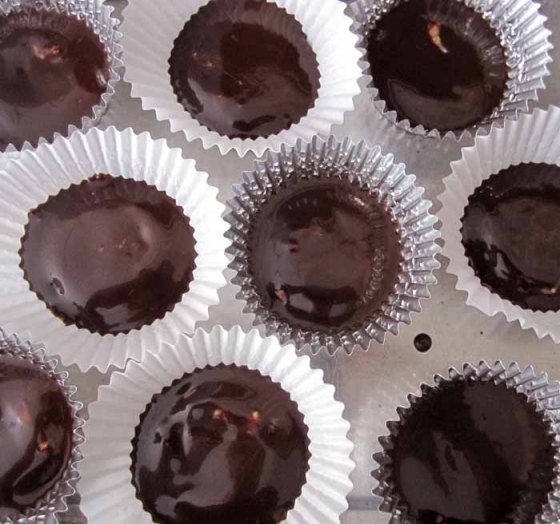 Something was not right. 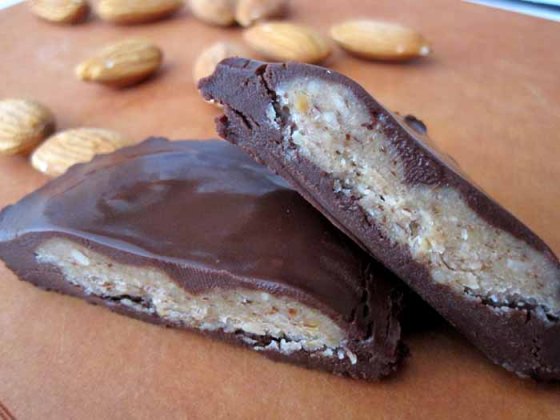 The chocolate was too soft. Not gooey, but not what I wanted either. And it made a mess on the wrapper!

Back to the drawing table, so to speak.

Yes, this was it.

This time for the filling I used plain peanut butter as the almond butter was too mildly flavored in my opinion. You can add coconut oil, maple syrup and vanilla for more flavor, but I liked the sweet/salty combo of the peanut butter all by itself. 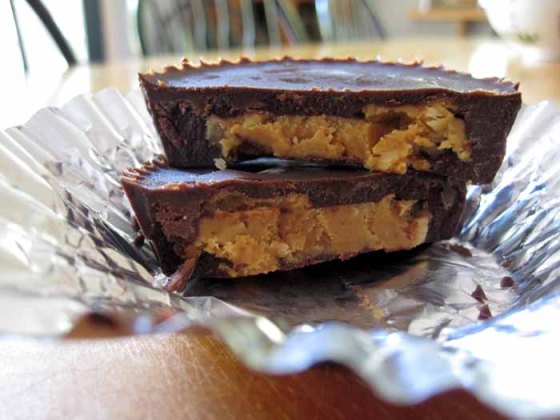 I tried one more batch using butter instead of coconut oil. It worked fine, but the coconut oil is my favorite. I love how it melts in your mouth.

Besides, coconut oil is my “bestest” friend right now. I don’t know why one’s lips get so dry with braces, but there’s nothing like your upper lip sitting on top of a shelf of metal because it’s too dry to slide over it. Was that too much information? Sorry!

Yes, I got my braces on yesterday and so far it hasn’t been too bad. Should I be worried that it’s not as painful as the spacers? And I can chew real food – though I have to be very careful that I don’t bite wrong. My front teeth are very sensitive.

Here’s the end results recipe – if you haven’t had enough about chocolate and peanut butter already!

Combine chocolate ingredients in sauce pan and warm just until melted and combined. Spoon a good teaspoon of chocolate sauce into 15 muffin liners. Place in freezer and chill 5 minutes while you combine the ingredients for the filling.

Remove from freezer and place a teaspoon of filling in the middle of chocolate base. Flatten a bit with the spoon and drizzle on remaining chocolate (about a teaspoon each). Freeze until hardened – about 20 minutes.

We are in serious trouble, folks.

It was 82 degrees yesterday. It always happens in the spring…The temperatures hit the 80s and 90s and we all drag ourselves around for a few days trying to get accustomed to the coming inevitably HOT summer.

It only takes a day (and one night of tossing under a warm sheet) for some of us to begin to wonder if we’ll ever make it through, or how we’ll handle it again without going insane.

“Saudi Arabia is the only other place I know of that has temperatures in the 100s for over 2 months”, Mom says.

I start dreaming of a an ice pool. You know, kind of like a hot tub only there are glaciers floating in it.

Then it happens. The Best Ever Chocolate Ice Cream churns together into a great spoonful of creamy goodness.

Like I said, we are in serious trouble. Thankfully the air conditioning kicks on. Maybe we can keep from making it all the time if we keep the air on.

By the way, whoever invented air conditioners? I love you with all my heart.  Just say the word and I will make you Chocolate Ice Cream whenever you like.

So, I was challenged by Shadowlilies to make a chocolate ice cream recipe that would rival the Best Chocolate Ice Cream You’ll Ever Have posted by Joanna Goddard over at A Cup Of Jo  and created by Cenk from Cafe Fernando.

I did my first test run two weeks ago. It was good, but my chocolate choice didn’t fit. It had to be smoother, richer, melty-er.  I knew immediately that I had to use Lindt. I actually thought about using the dark chocolate truffles, but decided against it a second later. Too much to unwrap.

The chocolate is what makes this recipe though. Go for the good stuff.

Shadowlilies laid out one condition in her challenge – no sweetened condensed milk! I went with coconut milk and a bit of sugar instead. I also added 2 egg yolks to substitute for the cornstarch and to give it more richness. The other big difference in the recipes is that I omitted cocoa powder for more 70% dark chocolate. Serious trouble, I’m telling ya!

Look! You can see me peeking over the edge. :)

Heat in a double boiler (or a bowl in a sauce pan as I do. :) just until steamy, stirring frequently. Add chopped chocolate and whisk until smooth. 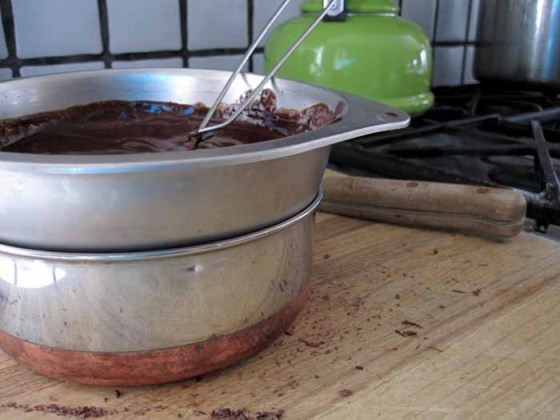 Sprinkle in the salt and add espresso and vanilla. Whisk in cream and coconut milk. 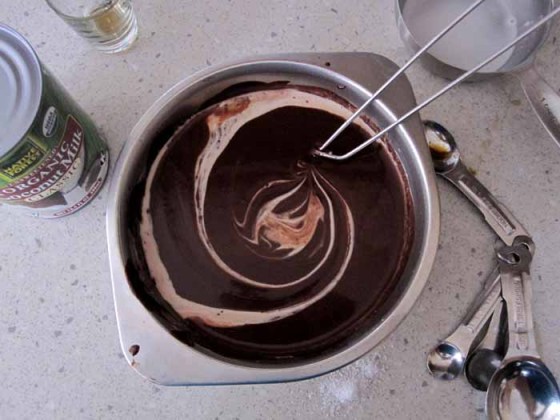 Now the recipe over at Cup of Jo doesn’t require an ice cream maker. That’s a pro. However it does require more cooking time and lots of cooling time before freezing. That’s a con.

My recipe calls for an ice cream maker. That’s a con if you don’t have one, but if you do, no problem. Just churn according to the maker’s directions. No cooling is required since it never got that hot in the first place and what was heated was only a small amount of the mix.

Have you ever tried photographing ice cream on a warm day?

Hmmm…I need a walk in freezer. That might take the place of an ice pool, too.

So, which recipe do you think is the Best Ever? Try them both out and let me know!

There was an error retrieving images from Instagram. An attempt will be remade in a few minutes. 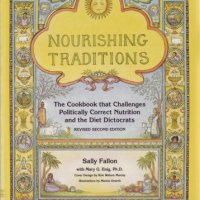