It’s been a rough week. A busy week.

My step-grandpa passed away after 91 years of living, so we took a trip to Arkansas for the service and to be with my Mormor. It was a quick trip because we had obligations here to get back to. My mom stayed with my grandma, though, and she and my sister are bringing her down this weekend. It will be good. I think Mormor needs to get away for a little bit. My Swedish grandma has outlived two husbands, and at 93, still loves to shop and swim and hang out with us young(er) ones.

At her age, it has to be terribly hard to feel so alone, but she needs to know she’s not alone. That she can come stay here with us. I hope she accepts that this weekend.

I want to make her Semla for tea one afternoon. And for breakfast, I think she’d like a warm bowl of steel cut oats strewn with apricot pieces, plump cherries, and hints of orange, cardamom, and vanilla.

Sound good? Stick around and I’ll make a bowl for you too. 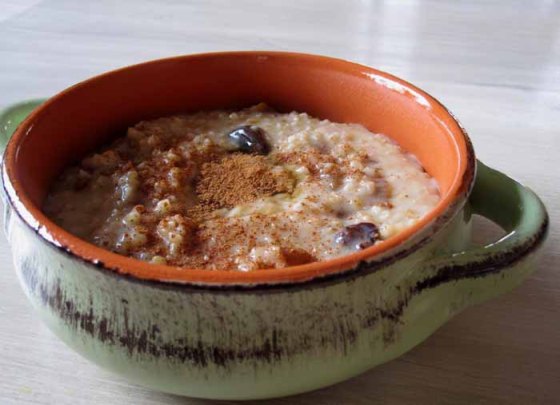 Combine, cover and soak overnight. In the morning, add…

Bring to a boil, then simmer for 15 minutes. In the meantime, combine and soak…

After the 15 minutes buzzer goes off, add the dried fruit mixture, along with…

Cook for 5-10 more minutes, or until desired consistency. Serve with raw honey, cream, toasted nuts, and a dash of cinnamon on top.

Dip your spoon into this creamy, chewy, porridge and let all your worries melt away with the butter.

I’m sure every family has a Jell-O Salad recipe tucked away in an old cookbook somewhere, perhaps passed down from the generation that lived when Jell-O was first named by Pearl B. Wait’s wife, Mary, in 1897.

Ours is Lime Jell-O Salad and has become a tradition to make and eat every Thanksgiving. 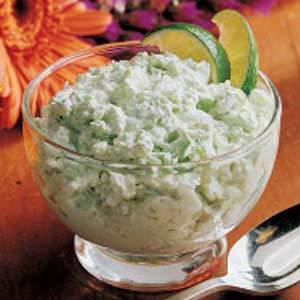 Reading the ingredient list is far from appetizing though. Who ever came up with such a thing??? Marshmallows, lime jello, cream cheese and crushed pineapple are fine and dandy, but then it gets crazy. Let’s add a tub of Cool-Whip to that (Do we even know what Cool-Whip is?). Oh! And how about a bottle of 7-up! And mayonnaise, like, everything has to have mayonnaise.

What?!!! Was this the result of a recipe contest sponsored by Hellmann’s, Dr. Pepper, Kraft Cool-Whip and Jell-o?

Oh, and we’ll call it a salad.

Definition of Salad from Oxford Dictionary

cold dish of various mixtures of raw or cooked vegetables, usually seasoned with oil, vinegar, or other dressing and sometimes accompanied by meat, fish, or other ingredients: a green salad [mass noun]: bowls of salad

And it fits the bill…why?

I’m not sure. Still trying to figure that one out.

Hmmm…What else can I add…

Maybe the inventor thought a name like that would make people think it was healthy.

Anyway, the traditional maker of our said traditional salad rebelled this year refusing to mix up such awful ingredients and serve it as food. Then I had an idea. How hard would it be to make a healthier version of a Jell-o Salad? (Don’t flip out, Grandma. :D )

I already had homemade marshmallows in the pantry leftover from our camping trip to the Wichita Mountains last weekend. The rest would be easy!

I decided on cherry instead of lime, since tradition was thrown to the wind anyway, and because I like cherries. I also couldn’t see using lime juice concentrate with pulp for the jello part, so cherry it is!

Combine  juice concentrate and water. Heat one cup of the mixture along with 2 cups marshmallows.

Dissolve 3 pkg of gelatin in the remaining juice.

Add the cream cheese and whisk until combined.

Don’t you love the snowflakes on Philadelphia’s seasonal packaging? :)

There might be flecks of cream cheese that won’t whisk in – don’t worry about it.
Trust me, it disappears.

Whip cream and fold in the yogurt…

And then the rest of the marshmallows. ( I cut them into bite sized pieces using kitchen scissors. ) 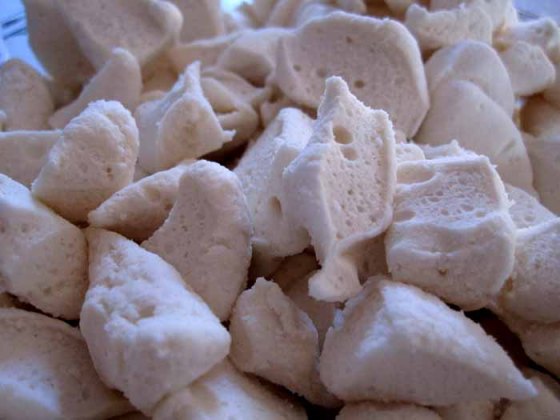 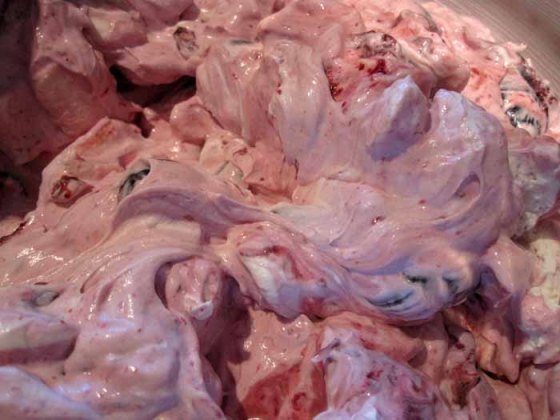 Stir in the gelatin/cream cheese mixture and pour into a serving bowl to chill and set. 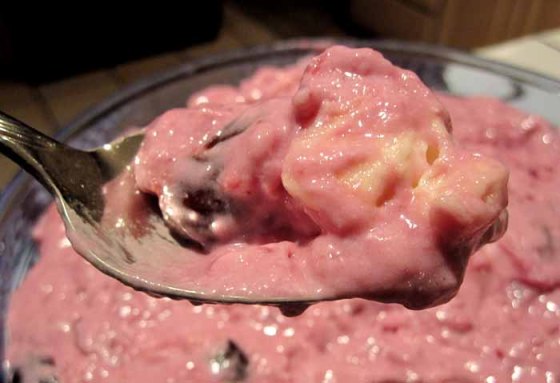 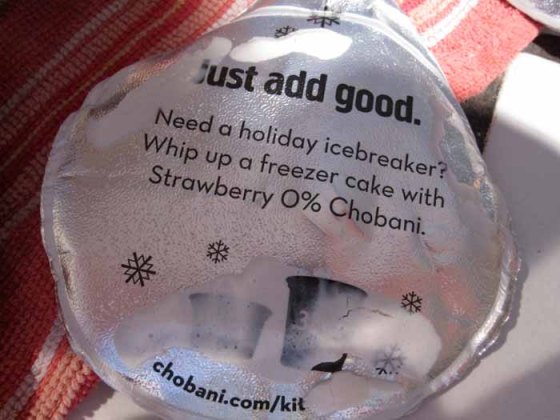 We shall see how everyone likes it on Thursday! (Personally, I think it’s fabulous… only it’s been talking to me from the refrigerator all day long. I ignore it. Of course.)

Happy Thanksgiving! Safe travels, thankful smiles, and happy eating to you all!

Just two years ago, my sister and I were over in Europe, somewhere between the Netherlands and Italy. You can read about our adventures over on our Sisters Four blog if you like. 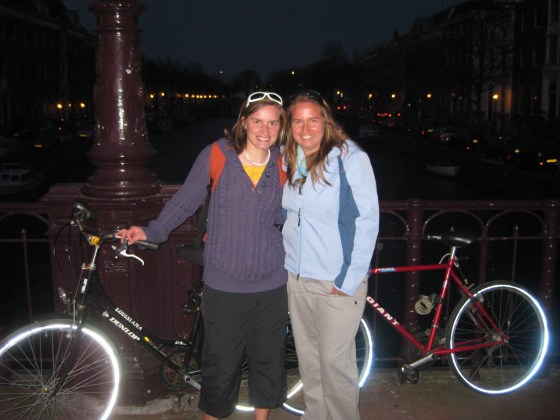 I’ve been missing Europe a lot lately – the trains, the towns, the people, and, of course, the food.

There are several flavors that totally remind me of different places in Europe. Part of that is due to my ancestry, part to travels, and there’s probably a part in there that comes from what I’ve been told by cookbooks or people in general. Perhaps it’s faulty, but never the less, there.

I’ve been wanting to make something that was reminiscent of the amazing flavors we sampled on our trip, but when I saw the recipe for Brown Butter Tarts with Sour Cherries in the Midwest Living a couple months ago, I knew I had to incorporate cardamom whipped cream somehow as well.

Cardamom is native to India, but my viking relatives (I’m sure I was related to one of them!) introduced it to Scandinavia over 1,000 years ago. That’s why cardamom always makes me think of my Swedish grandmother’s delicious Cardamom cinnamon rolls and not this great sounding recipe for Badam Burfi.

This fabulous photograph was taken by Moira over at Who Want’s Seconds? You’ll find some interesting facts about cardamom over there.

Almond is used everywhere and for good reason, it is AMAZINGNESS! The Swedes use mandalmassa (almond paste) in muffins and biscuits and other treats like the Swedish Mazarinmuffins. When we were in Haarlem, Paula, the hostess at our phenomenal B&B, served us a bread laden with liqueur soaked fruit and a whole log of almond paste wrapped inside. Oh my! That was a flavor worth savoring! I recreated the recipe for Kerststol in my Taste of Europe series here. 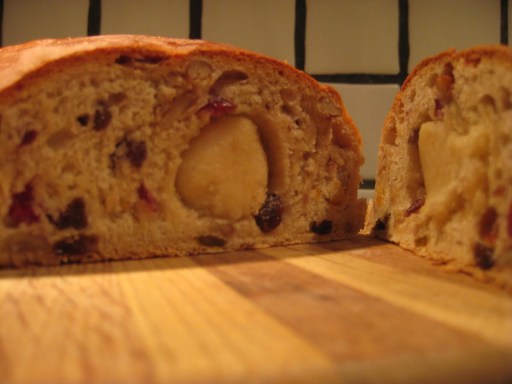 Okay, almond was a given. Maybe some orange. Cherries? I like that…

And so the Flavors of Europe Tart began to take shape.

I started with a crumb crust. Actually, I lied. I started with a pastry crust using almond paste, flour and butter. It was delicious, but it wasn’t what I was looking for. So we ate that and started over.

Pulse in a food processor, until blended and press into a tart pan. Bake for 15 -20 minutes or until golden.

I wanted vanilla bean custard for the filling, so I went with my tried and true custard/pudding recipe that I use for just about anything I need pudding or custard for.

Whisk all ingredients together in a sauce pan while cold. Turn on the heat and whisk while it warms. As soon as it starts to thicken, remove from heat. Stir in butter and vanilla and pour into tart crust. Cover with plastic wrap to keep from forming a skin on top and chill in refrigerator.

The yolks I used are farm fresh and were so orange. That explains why the pudding is yellow. I knew you were wondering. :)

And guess what? The shell of the egg was green/blue! I LOVE that!

I decided to used dark sweet cherries for the topping and reduce them in their own juices. So easy! Just put 12 oz. of frozen cherries in a pan and let simmer, stirring occasionally, until the liquid is a  syrupy consistency.

Beat cream until it starts to thicken. Add sugar, orange peel, vanilla and cardamom. Beat until desired texture is reached.

Slice tart and serve with a dollop of cream.

So now, just to be totally random (and because I like it so much and I’m so excited about it :), I have to share my latest project with you.

I decided to paint my closet. I’ve done a lot of painting in the past working for my Dad or sisters or doing jobs of my own and I’m telling ya’, I really dislike painting closets. I mean, come on, it’s just a closet! Right?

Well, I don’t know what got into me.

I took a plain, decent closet… 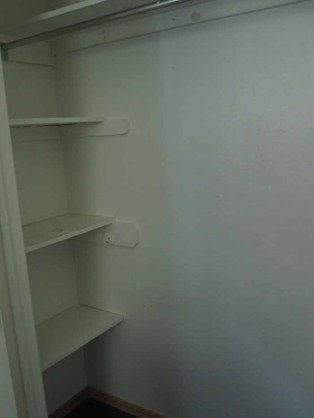 And spiced it up a bit!

I love it so much I’m doing to get rid of all my stuff, take the doors off my closet and enjoy it! :D Just kidding. But it was sad covering so much of it up.